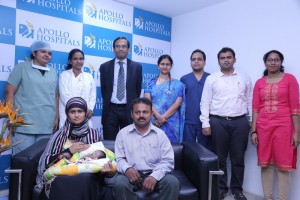 Saving a Child’s Heart Initiative, Sachi, is an effort of Apollo Hospitals Enterprise Limited to make good on its promise of ensuring affordable healthcare to the masses, especially those for whom advanced health care is beyond reach, be it geographically or financially. As the name suggests, Sachi focuses on children who suffer from cardiac disorders, primarily congenital heart disease, which often requires extensive medical intervention, and even surgery. With a highly skilled and motivated team of doctors, Apollo and SACHi have touched the lives of at least 50,000 children, since 2003, with much more waiting for treatment. Formore… 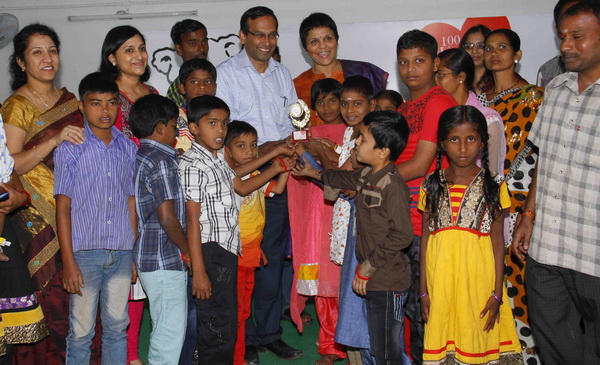 In India 3000 to 5000 children are born with single ventricle defects, out of about 50,000 children born with congenital heart disease every year. Single ventricle defects are complex heart diseases with very large holes in the heart and one of the lower chambers of the heart (the ventricle) is often rudimentary. Such children would need multiple operations called Fontan Repairs to survive beyond first decade of care. Unfortunately they do not survive for long, as they are not diagnosed and/or do not get any treatment at all.

Hyderabad, January 15, 2014: The 600-page biography of Dr Prathap C. Reddy – “Healer: Dr. Prathap Chandra Reddy and the Transformation of India” was formally released at Apollo Health City, on Wednesday. The biography has been brought out by Penguin, the world’s largest publisher and authored by Pranay Gupte, the veteran international journalist, biographer and historian. The book was two years in the making, and its publication comes on the occasion of the 30th anniversary of the founding of Apollo Hospitals. 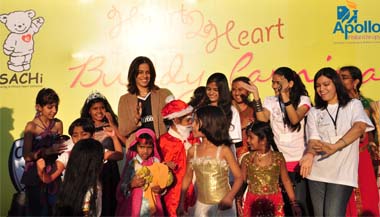 Hyderabad, December 24th, 2011: Saving A Childs Heart Initiative (SACHi) a registered charity in India has been untiringly working for providing succour to children suffering from congenital heart disease. Sachi as part of its initiative to raise funds to cover the cost of treatment for children suffering from heart disease organized a ‘Heart 2 Heart Buddy Carnival at Apollo Health City, today. 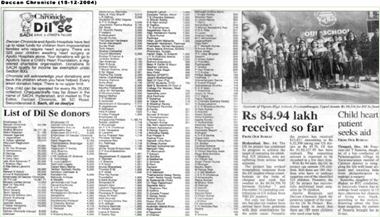 Dil Se .. Campaign for Saving A Child’s Heart generated a huge response from the cross sections of the society and over 450 children were treated from the donations raised through the campaign.

Dil Se.. can be rated as one of the best campaigns organized. The campaign not just raised funds towards the treatment but spread awareness across different communities around the world in regards to pediatric cardiac diseases. The campaign supported some of the very complex treatments. 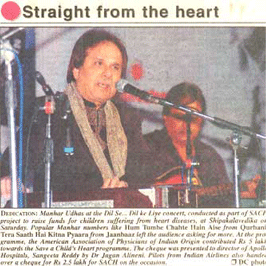 SACHi – Dil Se.. in association with AAPI (Association of American Physicians of Indian Origin) and Apollo Hospitals organized a conference for physicians to update medical fraternity on the disease burden and the need for their involvement.
The famous ghazal singer Mr.Manhar Udhas performed at a charity function organized to generate funds for Save A Child’s Heart as part of the conference. The Indian Pilots Association supported the cause in a big way.

Walt Disney Studios Motion Pictures, India and Sony Pictures have been associated with SACHi in various endeavors.
Disney’s ‘Finding Nemo’ an animation movie was screened in Hyderabad, Chennai, Kolkatta and Ahmedabad as an exclusive show to raise funds for the project with the help of SONY Pictures India Pvt. Ltd., Mumbai. 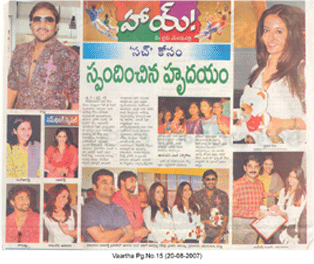 Ratatouille was screened in August 2007 at Prasad’s Multiplex. Academy Award®-winning director Brad Bird (“The Incredibles”) and the amazing storytellers at Pixar Animation Studios (“Cars,” “Finding Nemo”) took us into an entirely new and original world where the unthinkable combination of a rat and a 5-star gourmet restaurant came together for the ultimate fish-out-of-water tale. 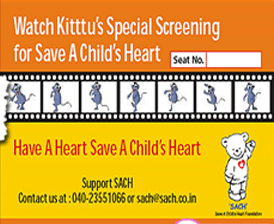 Bhargava Pictures “KITTU” – first 2d animation feature film in Telugu – announced the screening of Kittu for SACHi.
The movie was screened at Prasad’s Multiplex and many school children watched the movie. A special screening was organized for the children affected by heart diseases also.

Many schools including DAV, DPS, Shishivani, St.Mary’s St.Peters participated in the screening. 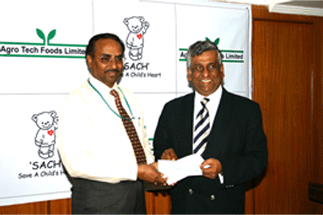 Agro Tech Foods Limited (ATFL) India’s leading FMCG Company made a donation of Rs 10 lacs to SACHi (Saving A Child’s Heart) a leading NGO working towards providing financial aid to children suffering from heart diseases and belonging to economically challenged families. Sundrop Heart the leading heart care edible oil brand from ATFL has been associated with the cause of heart care for the past years in 2006 as a part of World Heart Day promotion ATFL planned to donate one Rupee for every litre of Sundrop Heart sold from September 22, 2006, to November 30, 2006, to SACHi.

Mr Sen Gupta, President of ATFL said, “It’s our  privilege to be associated with Sachi and contribute in their effort to help children with heart ailments.

November 11 2006: The Heart 2 Heart Carnival was a terrific success with over 4000 children, teachers, parents and SACHi supporters participating in full swing for the cause of children. 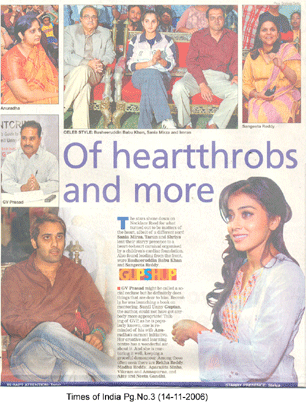 The ‘Heart 2 Heart’ Carnival was organized at Damodaram Sanjeeviah Gardens under the guidance of HUDA (Hyderabad Urban Development Authority) on a grand scale to mobilize children from the city and provide them a glimpse of the world of children suffering from heart diseases. To inculcate in them a sense of compassion and willingness to contribute in their own way towards helping these children belonging to the lower socio-economic groups.

The children were overwhelmed with the range of activities and were seen hopping around, fully engrossed in the activities and celebrating the wholesome entertainment with boundless glee. The icing to their complete day of amusement was the visit by their idols Sania Mirza, Shreya and Tarun.

Heart 2 Heart’ Carnival which began at 11.30 am had a host of contests including Art in Heart Contest, How to be Heart Smart – Poster/ Slogan contest, Mimicry show, Songs of the Heart – Poetry Contest, Talking Doll Show, Close to my heart – Painting Contest, Wear your Heart out – Fancy Dress Contest, Dhoom 2006- Inter-School Dance Competition.

A special performance by Shaimak Davar’s Institute For The Performing Arts was a great hit with children, teachers and parents as everybody let their hair down and danced along with the group at the end. The performance by physically challenged children of SDIPA’s Victory Foundation was a showcase of human triumph.

Mr Rangachary, Former Chairman, IRDA and Mr Basheeruddin Babukhan. The winners were given away prizes by the celebrities.

Several schools including Sujatha Public School, Bharatiya Vidhya Bhavan, Jain International, Sri International, Obul Reddy participated in the carnival and students from several other schools came along with their parents. 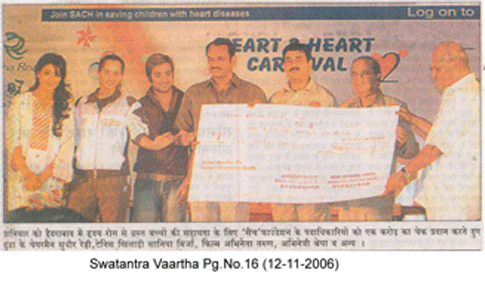 “HUDA” supported the event essentially to create awareness in the society about heart diseases in children and particularly to help children with heart diseases within its jurisdiction. HUDA donated Rs.1 Crore towards the treatment of children. Apollo Health Street employees and Family Health Plan Limited provided volunteer support for the program. Children benefited from the HUDA. 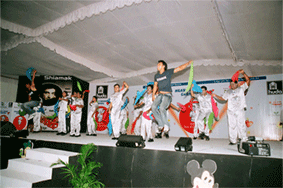 Radio Mirchi lent its support in a big way for the cause of children. A 10-day campaign was organized especially by Radio Mirchi to promote not just participation in the program but also bring awareness in the society about pediatric cardiac diseases. 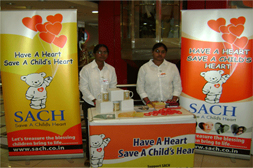 January 2008 – A freedom campaign on the eve of Republic Day was organized at Hyderabad Central. As part of the celebrations SACHi merchandise was sold at Central to raise money towards the cause and spread awareness about the disease in the local public. Hyderabad Central has been supporting SACHi and many campaigns have been organized till date.

A Charity Dinner with Deepak Rao for SACHi 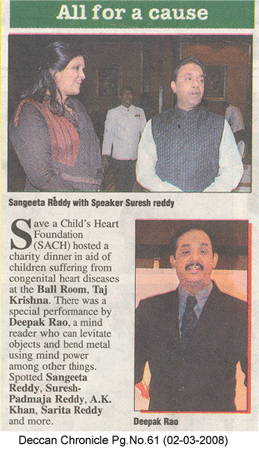 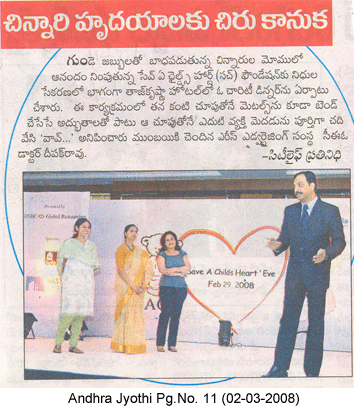 Hyderabad, February 29, 2008: Sachi hosted an exclusive charity dinner at Taj Krishna in aid of children suffering from congenital heart disease. Mr. Deepak Rao, CEO of Aries Advertising, Mumbai an ordinary man with extraordinary talent entertained the guests at the dinner. Mr. Rao is a mind reader, he levitates objects, bends metal and makes you laugh while doing the same. While his audience calls it ESP (Extra Sensory Perception), he himself terms it as the science of using one’s mind to the maximum. 60 couples attended the dinner. The event was supported by HSBC Global Resourcing, HUDA & Western Constructions.

Many individuals donated for the benefit of children with heart disease. Today Sachi has a list of over 8000 donors. Ms.Sania Mirza, Ms.Ileana, Ms.Shreya Sharan, the list includes people from different walks of life who have campaigned for the cause. (Please click the beneficiaries list on the home page to view the individuals associated with the cause).

Become a committed donor and help a child discover life again. No donation is too small or no donation is big to save a child’s heart. 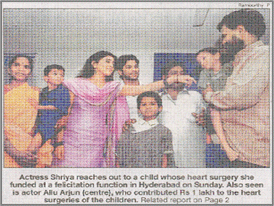 Actress Shriya did a special film stars evening for Sachi. Celebrities and stars from the Telugu film industry participated in the show. Shriya herself contributed to the surgery of 4 children. 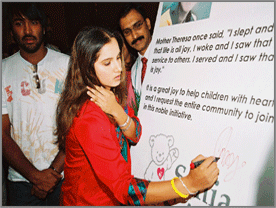 Global tennis sensation Ms Sania Mirza announced her commitment to join the movement aimed at helping children with heart diseases. She launched the Sachi bands endorsed by her. The proceeds of these bands will go towards helping children with heart diseases through Sachi. She also donated the money she won in the famous show “Kaun Banega Crorepati”.

Actress Ileana D’cruz in aid of children with heart diseases.

Each individual child presents different clinical conditions. The surgery cost includes the consumables (items used in surgery) and pharmaceuticals used for each child. In highly complex cases valves and conduits are used that are very expensive. On average, open-heart surgery costs Rs.1.5 lacs to Rs.1.8lacs (the US $4000 approximately) and a closed heart or interventional surgery costs Rs.80,000/- to 1 lac (the US $2500 approximately). In cases where conduit or valves are used the surgery cost goes up to 3 lacs. The funds required to cover the cost of the surgery will be borne by a combination of Saving a Child’s Heart, the government and the donors.